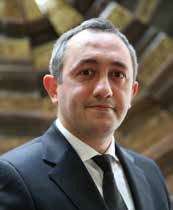 DR. MEHMET BABACAN
Member of the Auditing Committee of the Central Bank of the Republic of Turkey

Mehmet Babacan received his BA in Economics Marmara University in 2003 and MA in Economics from the John E. Walker Department of Economics at Clemson University in 2007. He then earned his Ph.D. in Economics from Marmara University in 2011. He began his career as a research assistant at Clemson University. Between years 2008 and 2014, Dr. Babacan served as full-time lecturer, department chair and director at Istanbul Commerce University. Meantime, he was a researcher in the Economics Department of SETA-Istanbul, leading Turkish think-tank until he was appointed as an advisor to the Office of the Prime Minister in October 2014. He has also been a member of the Auditing Committee of the Central Bank of the Republic of Turkey since May 2015. Dr. Babacan has contributed a range of publications, projects, research documents and conference presentations, primarily on international trade and governance, economic growth, and political economy. He has published and refereed for articles in several journals including Afro-Eurasian Studies, Insight Turkey, Emerging Markets Finance and Trade, Journal of Economic and Social Research, Journal of Business Ethics, Economics and Politics, Turkish Journal of Business Ethics and Educational Sciences: Theory & Practice. He is also the author of three book chapters on trade and development in distinct edited volumes.